Leaving the Garden of Eden 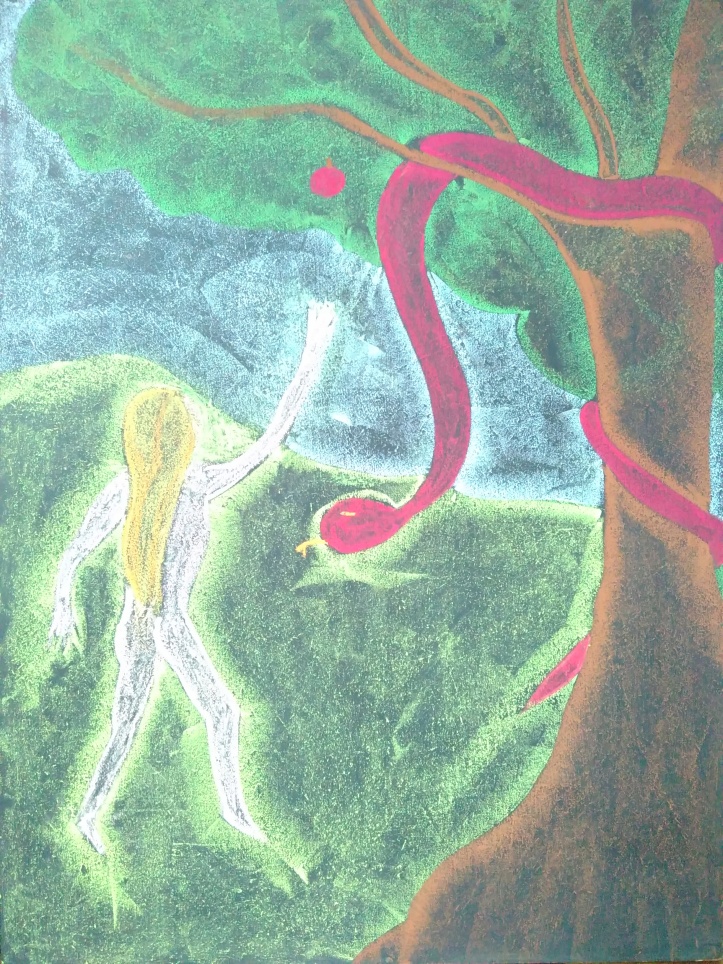 The significant changes that take place in the child’s development around the age of nine, and how the Waldorf Curriculum for Class 3 attempts to relate to this.

The growing child is in constant development from the moment it is conceived but there are some significant milestones on the journey to adult-hood and beyond which deserve a certain amount of attention, obvious ones being physical birth, second dentition and puberty.  One of these milestones occurs during the 9th year and is in danger of being overlooked as the changes are less obviously physical in nature and more related to the child’s emerging awareness and consciousness, although there are physical indicators present also, such as the ratio of breaths to heart-beats.

The 9th year is a period of polarity reversal. It is the year when a threshold is reached. Prior to this transition, the child is in total sympathy with its surroundings, it is an embodied sense organ reacting to external stimuli and the immediate climate. Subsequent to this transition, the child is a being separate from the World, able to stand back from reality and observe it from the ‘outside’. Far from a happy period of equilibrium this transition is more often felt as a ‘turning inside-out’ as the forces of consciousness are awakened from within and turn to meet the world with a new antipathy.

The 9th year transition is sometimes referred to the ‘crossing of the Rubicon’ which references Julius Caesar’s bold march on Rome. The Rubicon was a shallow river which created a boundary between Italy proper, controlled directly by Rome, and the Roman province of Cisalpine Gaul. Julius Caesar knew that crossing the Rubicon with his standing army was an act of war against the Roman Senate from which he could not retreat; he had crossed the ‘point of no return’ and was committed to living the inevitable consequences. He is said to have uttered “alea iacta est” – “The die is cast” as his troops marched through the shallow waters.[1]

Just as Julius Caesar had passed a point of no return so does our 9th year child. The dreaminess and fantasy land of young childhood is left behind and can never be regained, the journey to adulthood is firmly set in motion and a new critical eye is cast over the world. Therefore the 9th year transition is also sometimes referred to as ‘leaving the Garden of Eden’. The innocence of childhood is somewhat lost; children become more embarrassed to be seen naked and a sadness can be felt as the child leaves paradise and they discover a world of loneliness and separation; fears and pains.

This can be a difficult process for some children: parents and teachers, once loved unconditionally, are now weighed up and found wanting; the failings of the adults around the child are all too obvious and feel like a betrayal: After years spent idealising and imitating these perfect beings the 9 year old discovers that their parents and teachers are mere mortals; they are error prone, inconsistent and unreliable. As the gates to the Garden of Eden close rapidly behind the child they feel that they are losing something precious and yet are not too sure, afraid even, about what it is that lies before them, and for this reason the transition is also called the 9th year ‘crisis’.

This time can be a real crisis for some children. The sense of loss from leaving the Garden of Eden can lead to fearful thoughts and nightmares about death and abandonment. The very idea of death shifts from being the very matter-of-fact impression that the young child has of it towards a more ambiguous concept as one is able to contemplate one’s own death and realises that one’s parents will die and all the questions and fears which arise from that inevitability can be very unsettling and scary for some children.

This new capacity for self-awareness also brings certain gains as well. The child is able to plan ahead into the future, to embark on long-term projects with friends and family and is becoming aware of their own personal power. The 9 year old lacks, however, the natural ability to keep their power in check and the forming of unhealthy cliques within the classroom can occur including bullying, scapegoating and ostracising. Children will be trying out their new powers of cunning, intellect and social control and will be testing the boundaries of what is acceptable.

They may become defiant, challenging the teacher and parents. They may become argumentative and probing, attempting to find out what really lies behind this teacher, asking: ‘from where does their authority come?’.

Other questions such as ‘am I adopted?’ may arise in the child’s mind which come from this feeling of isolation as the child increasingly becomes aware of their separateness from everything else: ‘How can anyone know me or understand me if we are all separate?’.

The world as a whole is looked at more critically, fantasies such as Father Christmas and the Tooth Fairy, as well as fairy tales in general are likely to be dismissed as babyish yet the child is on shaky ground as s/he does not yet know what is to replace these old comforts, rituals and securities.

The Class teacher, then, must be aware of this transition, this potential crisis, and must meet the children in a new way. They must be ready for the new sense of antipathy the children will be presenting towards them as the teacher and towards the world in general. They must not take it personally that the unconditional love of classes one and two has gone and has been replaced with suspicion and cynicism. The class teacher must rise to the occasion: a new level of respect must be earned and won. When the boundaries are tested the class teacher must reassert them clearly, firmly and consistently. The children are testing the teacher and they are testing the boundaries. Teachers must allow them to do so but must also allow them to find security in the fact that the boundaries are still there.

Class teachers are fortunate, however, that the Steiner curriculum adapts in class 3 to meet the developing child with new forms of activities and new topics which can help nurture the emerging consciousness.

In order to meet the children in their quest to find the source of authority, fairy tales and fables give way to the stories of the Old Testament beginning, fittingly, with the creation myth of genesis and the story of Adam and Eve. The children are beginning to taste the fruits of the tree of knowledge and are being forced by their inner forces to leave the Garden of Eden so these stories will resonate deeply within them. And the stories of the One God, Yahweh, gives a context for the questions regarding the authority of the teacher and what lies behind it.

Once outside the Garden of Eden, the children are naked and defenceless and scared, alone in this big unfamiliar world. So we must give them the tools to survive! Class 3 is full of practical activities and archetypal skills: Shelter building; house building; clothes making; farming; animal husbandry; fishing; mining; blacksmithing, shoe-making; sheep-shearing; wool-spinning; bread-making; jam-making; wild-food gathering – all the skills one needs to survive in the world. This curriculum meets the child on two levels, on the first level it alleviates their fear of the world as they are learning how to survive in it and on another level, it channels their new-found power into constructive activities and team-work.

Alongside these practical skills, and taking advantage of the 9-year-old’s new powers of observation, the curriculum allows the child to discover measurement, grammar and musical notation, where they can learn that, although seemingly big and unpredictable, this world of ours has certain rules and structures which can be grasped, manipulated and sent back out with our mark upon them.

As well as grammar, riddles are used in class 3. The children, in their increasing social and linguistic literacy are beginning to discover that one can say one thing and mean another. Riddles are great way of playing with this concept in a healthy way as well as continuing the tradition of a rich oral landscape which is very prevalent in kindergarten and classes 1 and 2.

With their increasing musical literacy, and alongside learning the beginnings of musical notation, class 3 children are usually ready to ‘hold their own’ in singing rounds as, in fact, a certain separateness from others is required in order not to get lost while more than one part is being sung. Again this activity takes the natural inclination of a child during the 9-year-transition and allows it to develop in a healthy way. The same is true with games lessons where teamwork is encouraged as well as individual skill strengthened: ‘We are separate and we are together’.

Farming forms a major part of the class 3 curriculum and ties into the maths concepts of time and measurement taught at this stage as well. Apart from the practical applications, children are given opportunities to awaken reverence and gratitude at Earth’s abundance. As the children leave the Garden of Eden we must allow them to experience the beauty of the world. It can be big and scary and yet it is full of beauty and order and rhythm and has many gifts to bestow us if we learn to nourish it. The laws of time and space are explored and farming is a wonderful medium for exploring the eternal truths of the land and the seasons. Farming is dependent on the cycles of time; buildings are dependent on the physics of space; crops are dependent on the types of soil and, through the process of composting, children get a sense of our symbiotic relationship with the planet.

Traditional farming techniques are explored and tried out as far as possible within the reaches and resources of the school in question: ploughing, harrowing, sowing, harvesting, reaping, binding, stacking, threshing, winnowing and grinding. All these activities give an appreciation of the interaction of humans and nature and how we are both completely subservient to the natural cycles and also capable of moulding the natural world to our own ends.

When exploring measurement the curriculum begins with the body. The room is measured according to how many children can stand along one wall, or how many pigeon steps one can take across the floor. The need for standardisation naturally occurs as everyone gets different results. How are we to compare the lengths or weights of different people? How can we make it fair?

From the rhythms of the year explored in farming we can drill down into the measurement of time, the year, months, weeks, days, and the 24 hour clock etc.

Another major facet of the class 3 curriculum is the building main lesson. Again, the children are given opportunities for hands-on, practical activities and explore what lies behind the façade of a building: Who was involved in building it, where does electricity come from? Where does our faeces go?

The 9th year transition is a major milestone in the child’s development and one that must be handled both tenderly, with awareness of what the child is leaving behind in the Garden of Eden, but also boldly, with an upbeat positivity about the beauty of the world they are about to venture into. The Steiner curriculum meets this transition with a healthy dose of the outdoors and a set of practical activities which imbue the emerging consciousness with a sense of awe and wonder at the splendour of the world and give a good understanding of the rhythms and structures of the natural world which give the child a sense of orderliness and security.